"Tiny" albatross from the past thought to have eaten fish

Gerald May (Senckenberg Research Institute and Natural History Museum Frankfurt, Frankfurt am Main, Germany) and Alan Tennyson describe open access a small fossil albatross with what is thought to be a narrow fish-eating bill in the journal Ibis.

“We describe a nearly complete, three‐dimensionally preserved skull of a new albatross species from the late Pliocene (3.0–3.4 million years ago) Tangahoe Formation of New Zealand. Aldiomedes angustirostris, n. gen. et sp. has only about 90% of the length of the skull of the smallest extant albatross and is the geologically youngest record of a small‐sized albatross known to date. The new species is characterized by a mediolaterally compressed beak, which is not found in any living albatross. The small size and some cranial features of A. angustirostris indicate that, in spite of its comparatively young geological age, the new species was not part of crown group Diomedeidae. We hypothesize that A. angustirostris was more piscivorous than extant albatrosses, which predominantly feed on squid. The reasons for the extinction of smaller‐sized albatrosses are elusive but may be related to changes in seabird fauna during the Pliocene epoch, which witnessed the radiation of various non‐procellariiform seabird groups.” 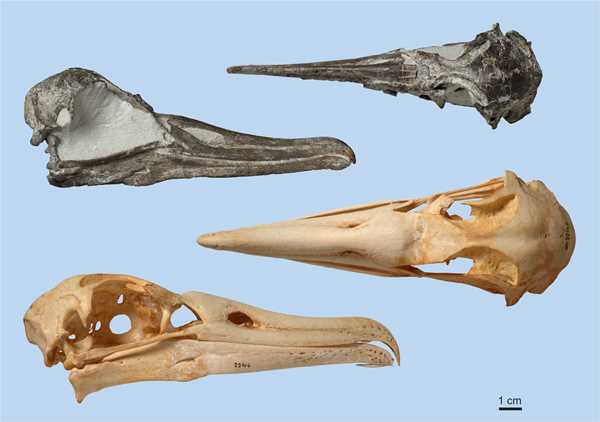 Read a popular account on the publication; also here.