Imping the flight feathers of a Laysan Albatross, a Hawaiian Petrel and a Red-tailed Tropic Bird

Feather imping is a procedure, best known from falconry, whereby broken or missing flight feathers are replaced by identical feathers obtained from another bird, usually of the same species, by grafting.  Cases of imping being used on seabirds seem few; ACAP has identified only three such occasions, two on procellariiforms, as briefly described below.

The first case is of a Near Threatened Laysan Albatross Phoebastria immutabilis found in March 1979 on the US mainland in San Francisco with its wings and tail clipped.  Following imping of its primary and secondary wing feathers (the tail was left clipped) and two months of rehabilitation by International Bird Rescue it was banded (977-35061) and flown to and released on Midway Atoll National Wildlife Refuge in May the same year.  Remarkably, nine years later in February 1988 the bird, nicknamed “Munch” when in captivity, was discovered incubating on Isla Guadalupe, Mexico.  Read more here. 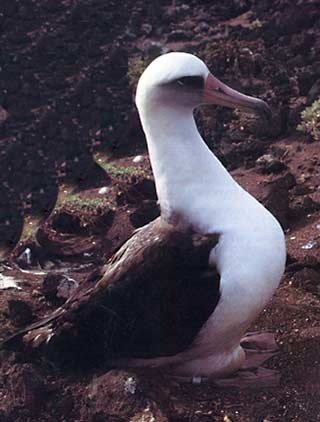 The second case discovered is of an underweight Red-tailed Tropicbird Phaethon rubricauda chick on the Hawaiian island of Kauai that was taken into captivity in 2006 and hand reared.  It was found to be unable to fly due to damaged flight feathers.  An imping procedure described in the Journal of Wildlife Rehabilitation allowed the bird to fledge.

The third and final record is of a globally Vulnerable Hawaiian Petrel Pterodroma sandvicensis fledgling found on Kauai in 2015 with badly broken primary feathers.  In an imping procedure the Save our Shearwaters programme of the Kauai Humane Society took feathers from a previously deceased petrel and grafted them onto the broken shafts.  Each feather from the donor was placed on the same side and in the same order on the recipient bird.

The bird was placed in a conditioning pool the day after the imping procedure to test waterproofing of the new feathers and released on the shoreline the next day.  Information edited from then Save our Shearwaters Facebook page

Reports of more cases of the imping of seabirds, especially of albatrosses and petrels, will be welcomed.