It is well known that North Pacific albatrosses swallow large amounts of floating plastic items, which they feed to their chicks, as for example highlighted in the film ALBATROSS by Chris Jordan.

In the southern hemisphere, the main home of the world’s albatross species, it seems much less plastic ends up in the stomachs of albatross chicks, perhaps at least partially reflecting the smaller amounts of plastic floating in southern seas.  Records of plastic ingestion will help assess the severity of the problem. A recent post by the Royal Albatross Centre shows that the globally Endangered Northern Royal Albatrosses Diomedea sanfordi of Taiaroa Head in New Zealand are not immune from plastic pollution as the following quote and photograph show.

“On an unremarkable plastic tab, ‘OPEN’ spelled out in raised letters lets the consumer know how they will get into their yogurt or ice cream container.  In an instant, that tab is broken off and its life as a useful piece of plastic is complete.  But where does it go from there?  For this one, into the gut of a hungry albatross chick on Taiaroa Head/Pukekura.  It is one of the five pieces of plastic found by [Department of Conservation] Rangers on the headland this year.

Albatross chicks, usually before they fledge, do their best to rid their guts of any indigestible material. For the most part, this means a small pile of squid beaks — gastric trophies of past meals. Small, sharp, and inconspicuous, these pieces of plastic were in amongst the squid beaks, and that is concerning.” 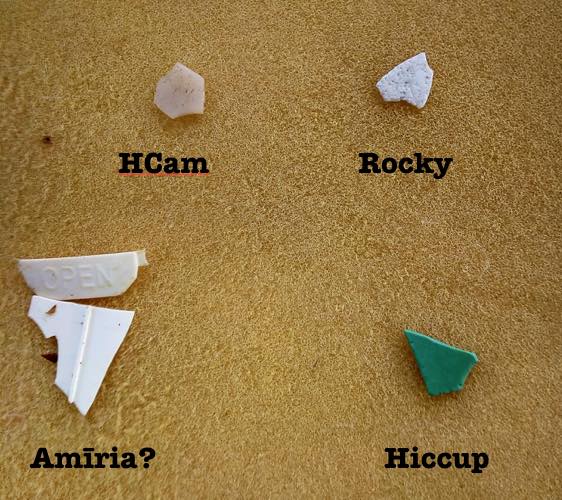 Information from the Royal Albatross Centre.