A while back ACAP Latest News reported on innovative action taken to allow a pair of Laysan Albatrosses Phoebastria immutabilis to hatch their adopted fertile egg by slipping a plate under the nest bowl so the egg would not get buried: “Fergie and Malia are members of a female-female Laysan pair that have been together on Kauai since at least 2010. Every year since then both their eggs get buried in the nest bowl and neither is properly incubated as a consequence. Fergie has a serious limp of unknown derivation, so it appears her attempts to kick out excess nesting materials may inadvertently cause her to dig a hole into which the eggs fall” (click here).

Hob Osterlund of the Kauai Albatross Network and an ardent supporter of all things albatross now reports via Facebook:

“Remember Amos, the mōlī chick whose devoted moms had failed for years in their nesting attempts? One of them, Fergie, has a significant limp and has inadvertently buried their egg each season. This year we slid a blue plate under their nest and Amos is the result. Days before he fledged, he returned to hang out near his hatch site. Then he flew. How cool is that? Congratulations to the first-time mamas, Fergie and Malia.”

In similar vein ACAP Latest News expresses its congratulations to Hob Osterlund for her work with Kauai’s Laysan Albatrosses. 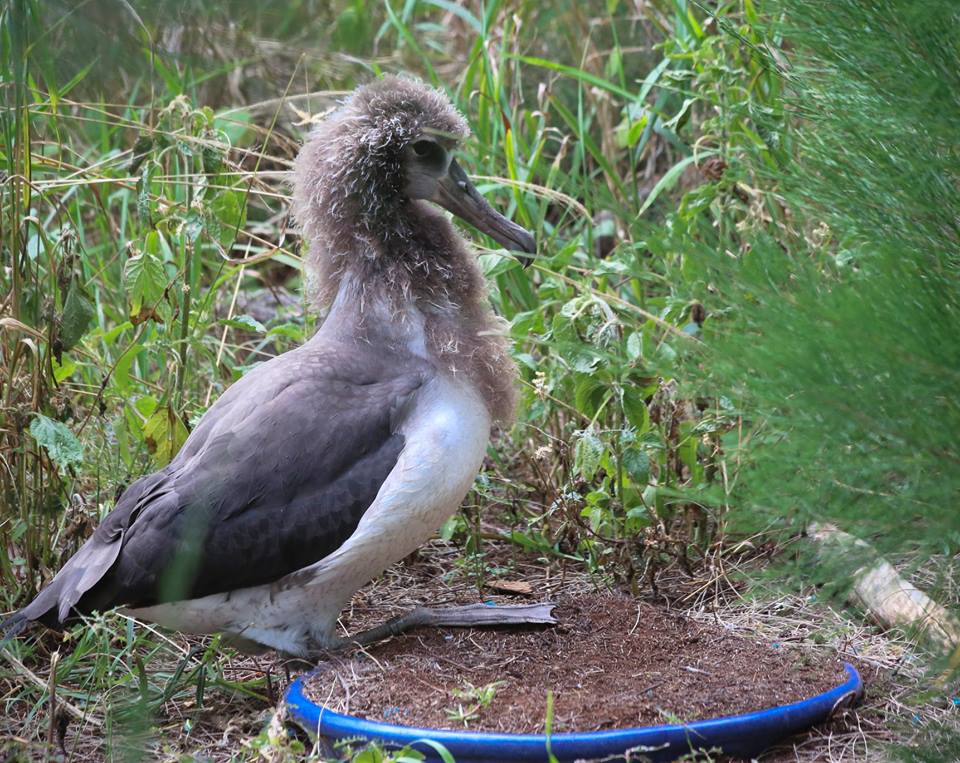 Amos on his blue plate nest shortly before fledging, photograph from Hob Osterlund