Travel can make you new friends: breeding‐site vagrancy and hybridization in albatrosses

“Given the rarity of hybridization in seabirds, which presumably relates to their very high philopatry, the degree of breeding‐site vagrancy should correspond with the incidence of mixed‐species pairing, although not necessarily of hybrids if there are behavioural or genetic barriers to successful reproduction. Using molecular methods, we verified that two of the three chicks hatched by a vagrant male White‐capped Albatross Thalassarche steadi paired with a female Black‐browed Albatross T. melanophris at South Georgia were genuine hybrids (these chicks died before fledging, but a third chick – the result of an extra‐pair copulation – fledged successfully). In a wider review, we could find only five known or suspected mixed‐species pairs, and three different hybrids in albatrosses, mostly between closely‐related species. This appears to reflect behavioural barriers to hybridization in sympatric species and the low incidence of breeding‐site vagrancy (which mainly involves single individuals that invariably associate with the most phenotypically‐similar local taxon). Breeding‐site vagrancy is most frequent in the ‘shy‐albatross’ complex, which could explain why genetic divergence occurred more recently in this group than in other Thalassarche, and hence exploratory behaviour appears to be more important than numerical abundance or breeding distribution in driving colonisation as well as hybridization processes in albatrosses.” 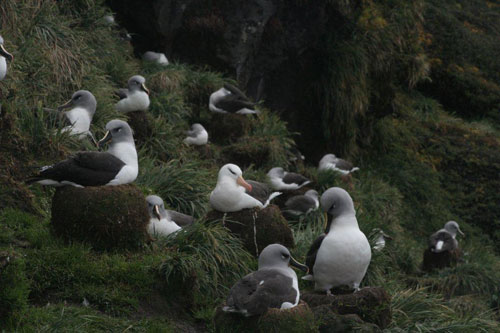 A vagrant Black-browed Albatross on a nest among Grey-headed Albatrosses on Marion Island, photograph by Genevieve Jones