On 15 April the Hawaiian island of Kauai was hit by a massive storm that caused extensive flooding and damage in the northern part of the island (click here and here). Rainfall in the 24-hour period of the storm was measured at 48 inches [1.2 m], and is being reviewed as the most rainfall in one day ever recorded anywhere in the U.S.A. (click here). 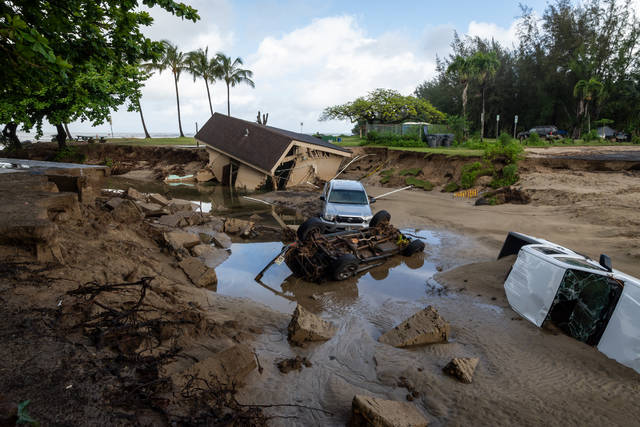 After the storm: washed-away vehicles and a public rest room building in a river bed

ACAP Latest News reached out to its Hawaiian contacts to ask how the island’s north-shore breeding Laysan Albatrosses Phoebastria immutabilis had fared through the downpour.

Cathy Granholm of Princeville in the north of Kauai wrote to ACAP Latest News:

“All of the 24 Princeville chicks made it safely through the storms. We all tend to give these birds our human qualities, but even surrounded by “civilization,” they lead the albatross life. MK, the chick in my yard, had access to shelter, yet she chose to sit totally unprotected as thunder and lightning shook my house, and while the heaviest rain I can ever remember formed rivers through my yard. She sits alone most of the time, with the occasional visit by a pesky non-nester. She has no reason to be afraid of anything.  It is not a question of courage, she is a part of the natural world, she meets challenges as they arise; she has no time to waste in the human activity of anticipating problems. MK spent the day after the storm grooming her feathers, having lost more of her baby fluff to the rain” (click here). 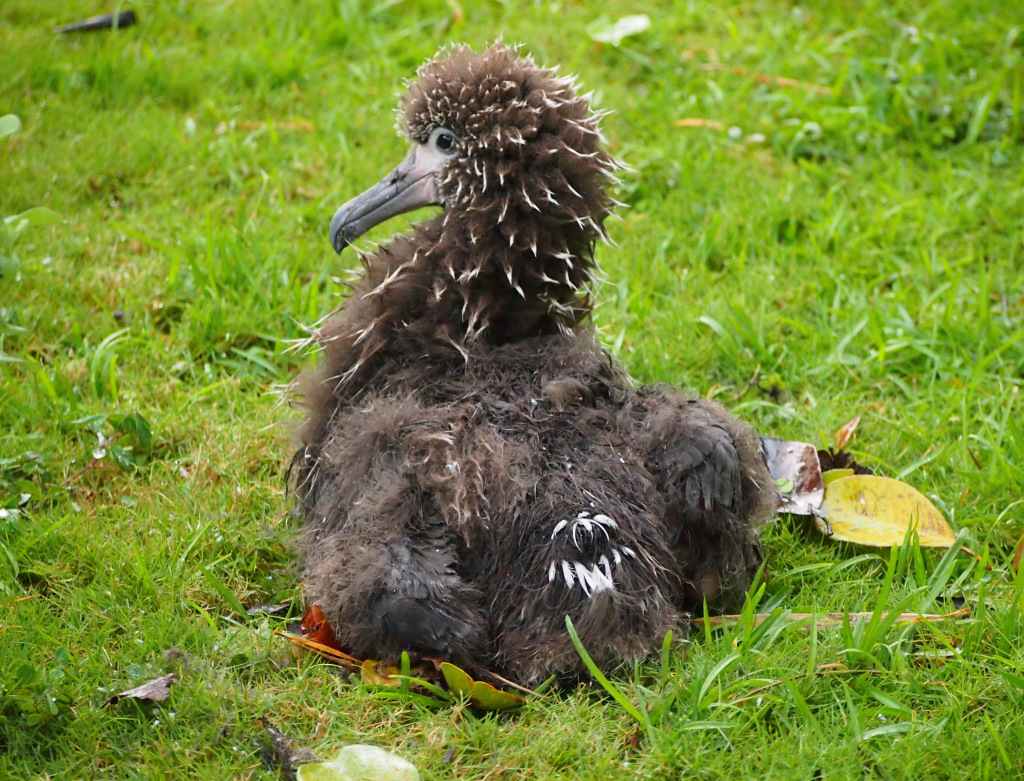 Laysan Albatross MK, a little bedraggled after the storm, photograph by Cathy Granholm

Kauai’s Hob Osterlund of Kauai also wrote to ALN: “I do not know of any Moli [Laysan Albatross] injuries or deaths related to the storms and floods. All the Moli chicks at the Cornell cam site are fine [the cameras were down but are now active again]. Since LAAL prefer to nest on bluffs, they are usually safe from floods. The KPNWR [Kīlauea Point National Wildlife Refuge] reports that all the Moli chicks there are OK after the storms. One chick came very close to being nailed by a falling tree, but got lucky. As Kauai gradually recovers from massive rains and subsequent life-altering floods, Mōlī parents keep right on feeding their football-sized chicks.”

It seems the albatrosses’ habit of breeding on bluffs above the island’s coastline made them less at risk from the flooding that occurred in lower-lying areas along the north shore, such as occurred in the town of Hanalei close to the higher ground of the Princeville community where albatrosses breed in private gardens. Good to know that the current cohort of 162 chicks (72 within the refuge, the rest on private lands, including Princeville) along Kauai’s northern shore all survived the storm and that Laysan Albatrosses on Kauai continue to have their human guardians. Mahalo to them all!

According to a posting today on the Pacific Rim Conservation's Facebook page the Nihoku predator-proof fence on Kauai wasn’t badly damaged by the storm despite sediment piling up. The fenced area where translocations have occurred of globally Vulnerable Hawaiian Petrels Pterodroma sandwichensis and globally Endangered Newell’s Shearwaters Puffinus newelli over the last three seasons still appears to be pest free.

With thanks to Cathy Granholm (My Albatross Diary) and Hob Osterlund (Kauaʻi Albatross Network).