Nematode infection in a Grey-headed Albatross chick at Marion Island

The Prince Edward Islands are Subantarctic islands in the southwest Indian Ocean that are of global importance as seabird nesting sites, and these islands being breeding grounds for five species of albatrosses (Procellariiformes: Diomedeidae). In March–April 2016 numerous chicks of one of these species, the grey-headed albatross (Thalassarche chrysostoma), were found dead at colonies on Marion Island (46°57′S 37°42′E), the larger of the two Prince Edward Islands. Affected chicks were weak, prostrated, apathetic, had drooping wings, and many eventually died while sitting on the nest. Five carcasses were necropsied, and samples were obtained for pathological and parasitological analysis. Four chicks appeared to have died from starvation, and one died due to air-sac helminthiasis, with extensive hemorrhage in the air sacs and multifocal pyogranulomatous air-sacculitis. The air sac parasites were identified as Diomedenema diomedeae (Aproctoidea: Desmidocercidae). Phylogenetic analysis of the nuclear 18S rRNA gene and mitochondrial COI gene confirmed that D. diomedeae belongs to the suborder Spirurina and showed that it is most closely related to the Diplotriaenidae (superfamily Diplotriaenoidea), a family of parasites that infect the air sacs and subcutaneous tissues of a variety of bird species. To our knowledge this is the first record of the occurrence of a nematode in the respiratory tract of an albatross and the first study to provide DNA sequences for a species of the superfamily Aproctoidea.” 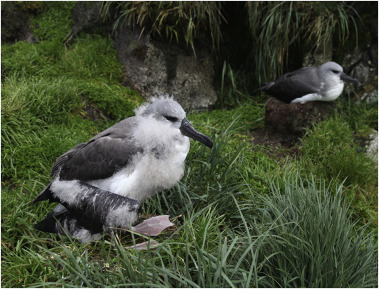 "A grey-headed albatross ... chick ... on Marion Island with drooping wings. A chick sitting with a normal posture can be seen in the background".