Interactions among foraging procellariiform and other seabirds, marine mammals and fishes get reviewed

Richard Veit (Department of Biology, College of Staten Island, New York, USA) and Nancy Harrison have reviewed interactions between seabirds, including procellariiforms, and other marine predators in the peer-reviewed and open-access journal Frontiers in Ecology and Evolution.

“Our review here shows that interspecific foraging associations among seabirds and other top-level marine predators are an essential component of the life histories of these organisms influence the population growth of the constituent species, and therefore the community structure of the marine systems in which they live. The mixed-species associations of procellariids, and their associations with other predators such as marine mammals, are likely to be of critical importance in structuring the ecosystems in the Southern Ocean, South Atlantic and South Pacific.”

“There is increasing recognition of the importance of “positive interactions” among species in structuring communities. For seabirds, an important kind of positive interaction is the use of birds of the same species, birds of other species, and other marine predators such as cetaceans, seals and fishes as cues to the presence of prey. The process by which a single bird uses, say, a feeding flock of birds as a cue to the presence of prey is called “local enhancement” or “facilitation.” There are subtly different uses of each of these terms, but the issue we address here is the ubiquity of positive interactions between seabirds and other marine predators when foraging at sea, and whether as a result of their associations the feeding success, and therefore presumably the fitness, of individual seabirds is increased. If this contention is true, then it implies that conservation of any one species of seabird must take into consideration the status and possible conservation of those species that the focal species uses as a cue while foraging. For example, conservation of great shearwaters (Ardenna gravis), which often feed over tuna (e.g., Thunnus) schools, should take in to consideration conservation of tuna. Ecosystem management depends on understanding the importance of such processes; the loss of biodiversity, and the consequent threat to foraging success, may be a substantial threat to the stability of marine ecosystems.” 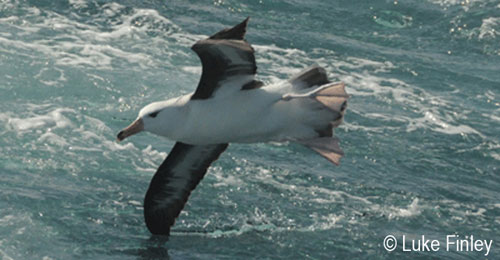 Enticott, J.W. 1986. Associations between seabirds and cetaceans in the African sector of the Southern Ocean. South African Journal of Antarctic Research 16: 25-28.