Sixty-seven Near Threatened Mottled Petrel Pterodroma inexpectata chicks were relocated from Codfish Island/Whenua Hou off the southern coast of New Zealand last week.  They were taken to a fenced site in the forested 800-ha Boundary Stream Scenic Reserve in the Maungaharuru mountain range, 24 km inland from Hawkes Bay on North Island.  The reserve is known as a “Mainland Island” where intensive control of mammalian predators is carried out.  The chicks will be hand fed in artificial burrows until they fledge, in the expectation they will return after a few years to the locality as breeding adults.

Starting in 2014, this is the fourth time the species has been moved to the area as part of the Poutiri Ao ō Tāne project, bringing the total number of relocated chicks to over 200. 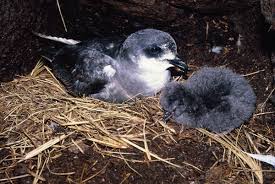 Previously, 50 Vulnerable Cook’s Petrels P. cookii chicks were translocated to the reserve in 2013, with 86 following in 2014 and more over the next two years.

“Poutiri Ao ō Tāne is a unique collaborative ecological and social project aimed at bringing native wildlife back into the lives of people in Hawke's Bay”.