The International Pacific Halibut Commission (IPHC) has not often featured in ACAP Latest News - although the bilateral RFMO between Canada and the USA does manage a longline fishery that takes place in albatross-rich waters in the North Pacific.  It also conducts at-sea surveys of seabirds (as reported here by Tracee Geernaert of the IPHC in Chapter 3.7 of a 2016 report) as well as keeping records of avian bycatch by the fishery.

“Counts of live seabirds, taken immediately following gear retrieval, have been conducted during International Pacific Halibut Commission (IPHC) fishery-independent setline surveys since 2002. The Convention waters, extending from off Oregon northward to Alaska and the EEZ border with Russia, are surveyed annually between late May and early September. A total of 19,553 seabird counts have been conducted over the last 15 years, with 1,362 occurring in 2016. More than 859,000 observations of seabirds have been recorded since 2002. Northern fulmars (Fulmarus glacialis), glaucous-winged gulls (Larus glaucescens), blackfooted albatross (Phoebastria nigripes), and fork-tailed storm petrels (Oceanodroma furcata) represent the most commonly observed species. The observed number of unidentified gulls has decreased, inversely correlated with an increased number of observations of glaucous-winged gulls and herring gulls (L. argentatus). This shift was likely the result of increased emphasis on gull identification during annual IPHC field biologist training. A total of 334 endangered shorttailed albatross (P. albatrus) sightings have been recorded overall, with an average of 22 observed annually since 2002.” 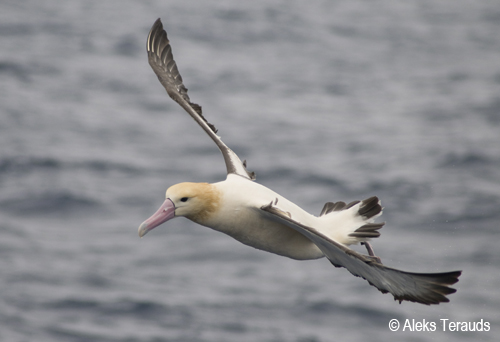