“South Africa’s Prince Edward Islands support a large proportion (44 %) of the global Wandering Albatross Diomedea exulans breeding population, yet most breeding phenology data are recorded from smaller and geographically distant populations. Timing of breeding at Marion Island was remarkably constant across three successive years (2007–2009), providing a good baseline against which future changes can be assessed. Male (but not female) early arrival and presence at the colony during the pre-laying period was positively related to breeding success.  Earlier hatching chicks were more likely to survive, but timing of egg laying and incubation periods did not influence fledging success. Although there was considerable individual variation in breeding phenology, average dates of male arrival, laying and hatching were later at Marion (47_S), Crozet (46_S) and Kerguelen (49_S) than at more southerly Bird Island, South Georgia (54_S).  Earlier breeding at South Georgia may ensure that chicks have time to grow sufficiently to survive harsh winter conditions that set in earlier at South Georgia.” 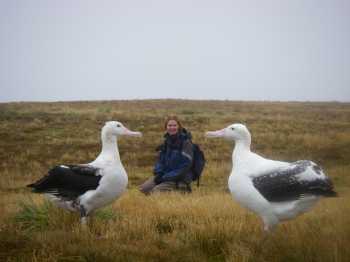 Wandering Albatrosses - and the author - at Marion Island

With thanks to Genevieve Jones – and for mentioning me in the acknowledgements!