“We investigated the physiology of two closely related albatross species relative to their breeding strategy: black-browed albatrosses (Thalassarche melanophris) breed annually, while grey-headed albatrosses (T. chrysostoma) breed biennially.  From observations of breeding fate and blood samples collected at the end of breeding in one season and feather corticosterone levels (fCort) sampled at the beginning of the next breeding season, we found that in both species some post-breeding physiological parameters differed according to breeding outcome (successful, failed, deferred).  Correlations between post-breeding physiology and fCort, and links to future breeding decisions, were examined.  In black-browed albatrosses, post-breeding physiology and fCort were not significantly correlated, but fCort independently predicted breeding decision the next year, which we interpret as a possible migratory carry-over effect.  In grey-headed albatrosses, post-breeding triglyceride levels were negatively correlated with fCort, but only in females, which we interpret as a potential cost of reproduction.  However, this potential cost did not carry-over to future breeding in the grey-headed albatrosses.  None of the variables predicted future breeding decisions.  We suggest that biennial breeding in the grey-headed albatrosses may have evolved as a strategy to buffer against the apparent susceptibility of females to negative physiological costs of reproduction.  Future studies are needed to confirm this.”

With thanks to Richard Phillips 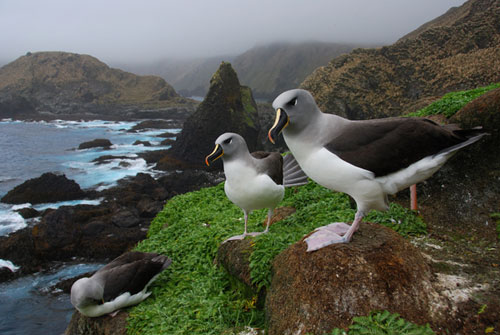