William Mackin (Guilford College, Greensboro, North Carolina, USA ) has published in the journal The Condor: Ornithological Applications on the reduced populations of Audubon’s Shearwaters Puffinus lherminieri in the Caribbean.

“Cryptic species are often difficult to count and thus protect.  Audubon's Shearwater (Puffinus lherminieri) is a cryptic seabird that has disappeared from many colonies, but knowledge of the population's status is incomplete.  This paper reviews the survey methods in detail and assesses the status.  This species nests or once nested on at least 154 islands in the Caribbean and remains on 137 today, with most habitat just above sea level.  Remaining colonies represent 1% of the former breeding area and are remote, with 98 sites lacking any estimate of density.  In 16 plots searched on multiple nights using playback, the probability of detection of defended nests was 79 ± 5% (57 of 72 defended nests) in a single night of searching. Pairs were attempting to breed in 54 ± 6% (39 of 72) of defended nests.  Average densities, adjusted for missed detections, ranged from 0.6 to 246 defended nests ha−1 (n = 21 colonies, median = 18.5 ha−1, area-weighted mean = 104 ha−1).  Using the best data from every colony, at least 13,600 defended nests (7,400 breeding pairs) remain.  If conservative densities from surveyed colonies occur on unsurveyed colonies, then about 37,900 defended nests (20,500 breeding pairs) should exist.  Assuming shearwaters nested on the known extirpated sites in lower densities compared to surveyed colonies, populations were at least 446,000 and potentially >2,000,000 defended nests.  Uncertainty in current population estimates could be reduced by surveying the largest unsurveyed colonies first.   Audubon's Shearwater could be used as an indicator of island and marine ecosystem health with the caveat that the population is a small fraction of its former size. Conservation recommendations include continuing standardized monitoring, surveying large unsurveyed sites, limiting the rise of sea level, and removing invasive species from colonies.” 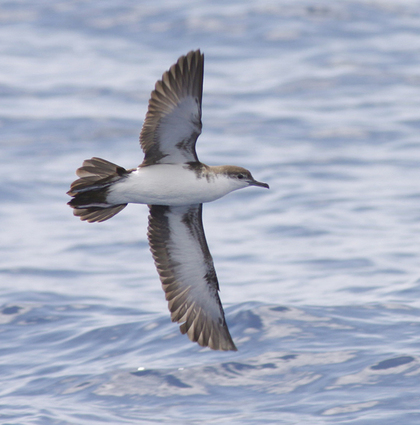