“Over the past three weeks, the Tasmanian Parks and Wildlife team of ranger Chris and wildlife ranger Marcus along with field biologist Kim and the assistance of trusty volunteers (Ali and George–BOM, chef Rocket and carpenter Joe), have been searching the featherbed for breeding northern giant petrels.  This work is part of the long-term monitoring of giant petrels on Macquarie Island to determine the population trend of these species informing international conservation management.

As both a scavenger and a predator that consumes small fish and the remains of carcasses, the giant petrels play a vital role in the Macquarie Island ecosystem.  Because of this, they were one species impacted during the Macquarie Island Pest Eradication Project (MIPEP), where in small numbers the giant petrels suffered incidental mortality through consumption of poisoned rabbit carcasses.  The census aims to monitor population recovery post MIPEP and meet Australia’s international obligations for monitoring threatened species.

The census, conducted in the north west of the island, counts and maps all the northern giant petrel nests in a set area each year.  This provides a comparable number of breeding attempts annually. A follow-up census in January counts all the surviving chicks, which provides an indication of breeding success. Last year the census showed that the population is stable and has continued to increase post-MIPEP.  This year it appears there is a slight increase in breeding numbers, however only time will tell if the chicks survive to continue the cycle.” 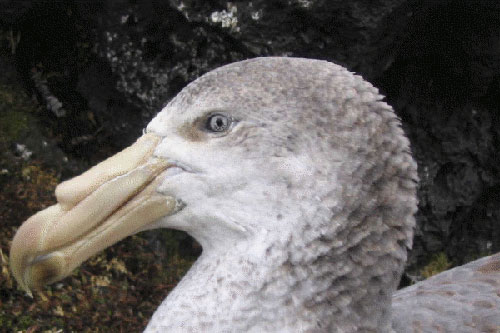