The British Antarctic Survey reports that Mount Curry on volcanic Zavodovski Island has been erupting since March this year (click here). 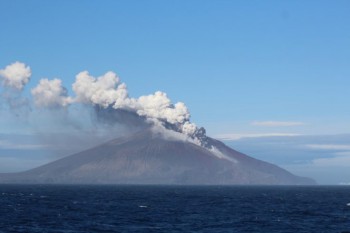 Zavodovski is the most northerly of the South Sandwich Islands, an uninhabited archipelago of islands in the Maritime Antarctic.  It supports millions of breeding penguins as well as a small population of Southern Giant Petrels Macronectes giganteus, most recently assessed at 64 pairs breeding on the flat ash plains at the northern end of the island near Reek Point in January 2011 (click here).

“Satellite images have confirmed that between one third and one half of the island has so far been covered in ash.  This is the first time that Zavodovski Island has been witnessed erupting, although there is evidence that it erupted in the 1970s, possibly in the 1980s and as late as 2012.  Two scientific expeditions are scheduled to visit the region from later this year and will try to assess the impact of the eruption.”  News of the situation with the island’s Southern Giant Petrels may then become available.