The breeding biology of the Macaronesian Shearwater gets studied

“The breeding success of burrow-nesting seabirds may be influenced by both nest site characteristics and oceanographic conditions influencing food availability at sea.  In this study we describe the breeding biology of the winter-breeding Macaronesian shearwater (Puffinus lherminieri baroli), including nest site characteristics and interspecific competition.  We also evaluate the possible effects of changing oceanographic conditions on breeding phenology and breeding success.  The study was carried out over two breeding seasons on two islands in the North Atlantic Ocean, Cima Islet and Selvagem Grande.  Oceanographic characteristics differed between years.  On a regional scale, the North Atlantic Oscillation (NAO) index was low and negative in 2011, and on a local scale, birds used areas with significantly lower values of chlorophyll a concentration and significantly higher values of sea surface temperature anomalies.  Hatching success was higher in 2012 than in 2011.  At both colonies, egg cracking was the main cause of hatching failure, but in 2011 several eggs on Selvagem Grande were deserted.  In 2012 birds laid earlier and chicks had longer wings and were heavier.  At both colonies, nests that were deeper, were sheltered from prevailing winds and had small chambers and a soil substrate had a higher probability of being used successfully by the birds.  Nests occupied solely by Macaronesian shearwaters were much deeper and had less volume than nests shared with other species.  Our study suggests that the breeding success of Macaronesian shearwaters is strongly related to nest site characteristics and that at-sea environmental conditions exert a strong influence on reproductive parameters, with birds breeding in a poor year (evaluated in terms of lower marine productivity) laying much later and their chicks growing at a slower rate than in a good year.  The influence of nest site characteristics and environmental conditions may be very important for understanding the breeding ecology of Procellariiformes and may help explain the negative population trend of Macaronesian shearwaters.” 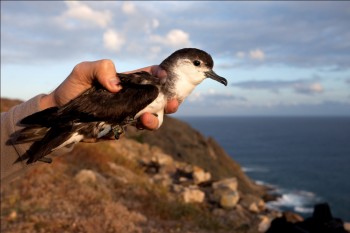