Eating on the wave: intentional capture of Critically Endangered Waved Albatrosses off Peru

Joanna Alfaro-Shigueto (Pro Delphinus, Lima, Perú) and colleagues have published in the Pan-American Journal of Aquatic Sciences on the reasons given for the intentional killing of Waved Albatrosses Phoebastria irrorata by Peruvian artisinal fishers.

“The waved albatross Phoebastria irrorata is classified by the IUCN as “critically endangered” because of its geographically restricted breeding range and evidence of a substantial decline in adult survival during the 1990s and early 2000s.  This decline has been proposed to be a consequence of incidental mortality in the Peruvian small-scale fisheries but also of direct hunting for human consumption by fishermen.  This paper uses a trans-disciplinary approach to describe and analyse the intentional capture of waved albatrosses in northern Peru by offshore small-scale fishermen.  During 2008, 36 interviews were conducted in the port of Salaverry to understand the extent and reasons for the intentional capture.  Sixty-nine precent [sic] of the interviewees mentioned occasionally harvesting albatrosses.  Considering two to three vessels capture albatrosses regularly in Salaverry, we estimate a total annual mortality between 16 and 24 individuals since 2006.  Reasons for capturing albatrosses included insufficient food supplies onboard during long fishing trips, collection of rings from ringed birds, the development of a taste for the bird’s meat and even boredom. Interviews with fishermen showed a lack of awareness of the conservation status of albatrosses.  We recommend strengthening the role of existing local governmental and non-governmental organizations involved with monitoring and surveillance, education and conservation.” 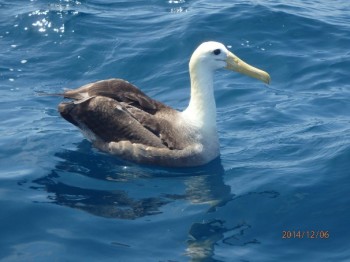 At risk in Peru: Waved Albatross at sea