Dundee University Professor Tony Martin, Project Director at the South Georgia Heritage Trust, has been named Conservationist of the Year by the Zoological Society of London. 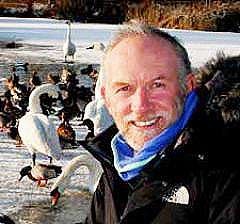 Professor Martin headed the “Team Rat” project to eradicate Norway Rats Rattus norvegicus and House Mice Mus musculus on South Georgia (Islas Georgias del Sur)*, that was conducted in three phases over 2011 to 2015.  Monitoring conducted to date indicates that the first phase of baiting was successful.  A survey at the end of next year will assess whether the areas baited during the second and third phases were similarly effective and that the island can be declared free of introduced rodents.

Professor Martin said he was “immensely proud” to be named Conservationist of the Year.  He added: “It was a privilege to lead such a remarkable team of people ... on this breath-taking sub-Antarctic island.”

Click here for a review of Tony Martin’s book describing the eradication programme.  Read previous reports of progress by Team Rat in ACAP Latest News and a news report on the eradication effort here.