Susan Waugh (Museum of New Zealand Te Papa Tongarewa) and colleagues have an in-press paper with the journal Marine Ecology Progress Series that considers the overlap between foraging areas of the Flesh-footed Shearwater Puffinus carneipes, previously identified as a potential candidate for ACAP listing, and New Zealand fisheries. 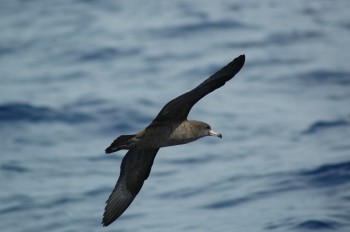 “Although the flesh-footed shearwater Puffinus carneipes is a species with large population sizes (10s of 1000s of breeding pairs) and widespread sub-tropical distribution across Australasian water masses, it is amongst the species most threatened by longline fisheries mortality in this region.  While bycatch mitigation measures have been very successful in reducing mortality in some species, bycatch of flesh-footed shearwaters is still high with captures estimated to exceed the sustainable take of 514 birds per year by nearly 200 birds for New Zealand fisheries alone.  Management agencies aiming to reduce the impact of fisheries mortality on the populations need to understand which marine areas are being used by flesh-footed shearwaters, to better target fishery monitoring and mitigation efforts.  Foraging studies of seabirds tell us about their use of resources, the way species segregate the available habitat and help to identify threats that may affect population viability.  Breeding shearwaters were tracked from 2 New Zealand colonies using GPS loggers.  Individuals foraged over shelf and deep oceanic waters up to 1200 km from their nesting sites during incubation, but were mainly within 370 km during early chick-rearing.  The intensity of potential interactions increased for trawl and surface longline fishing between the January and February study periods, but remained at a similar level for bottom longline fishing.  Following the field data collection, changes to fishery monitoring were implemented in the areas where shearwaters foraged.”

Cooper, J. & Baker, G.B. 2008.  Identifying candidate species for inclusion within the Agreement on the Conservation of Albatrosses and Petrels. Marine Ornithology 36: 1-8.