Got that sinking feeling? A Scopolis Shearwater colony remains stable due to immigration

“Populations of long-lived species are highly sensitive to increases in mortality, but a loss of breeders can be compensated for by recruitment of local individuals or immigrants.  Populations maintained through immigration can be sinks, jeopardizing the viability of the metapopulation in the long term when additive mortality from anthropogenic impacts occurs.  Thus, the correct identification of whether a breeding population is maintained by local recruitment or by immigration is of special importance for conservation purposes.  We developed robust population models to disentangle the importance of local recruitment and immigration in the dynamics of a Western Mediterranean population of Scopoli's shearwater Calonectris diomedea showing low adult survival but stable breeding numbers.  Our results show that the shearwater population is not self-maintained but rescued by immigration: yearly immigrants recruiting in the population represents ~ 10–12% of total population size.  We believe that this situation may be common to other Western Mediterranean populations, currently acting as sinks.  We recommend urgent demographic studies at large core colonies to evaluate the global conservation status of the species.” 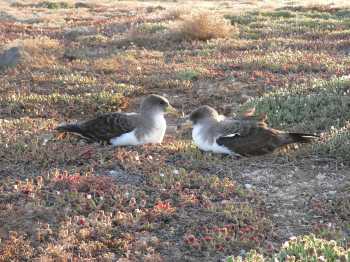