A sandstorm buries hundreds of albatross chicks on Kure Atoll

Hundreds of Black-footed Albatross Phoebastria nigripes chicks were buried up to their necks last month by north-westerly winds that caused a sand storm on the beach the USA’s Kure Atoll, North-western Hawaiian Islands.  Winds were up 40 km/h and with very dry sand resulted in the storm. 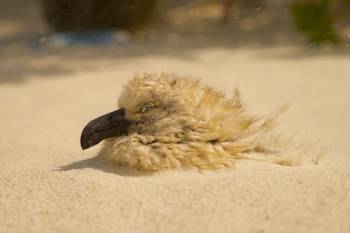 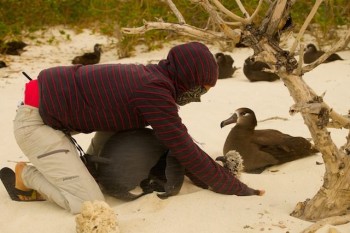 Chicks trapped in the sand overheat and die if they are not dug out (as their parents do not dig out their chicks) so Hawaii Department of Land and Natural Resources (DNLR) crew members on the atoll, wearing protective goggles and warm clothes, worked into the late evening to dig out over 400 chicks.  The rescued chicks were doing well some days later. 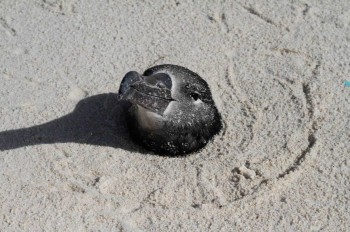 The Black-footed Albatross depicted here buried up to its neck was incubating an egg on Kure Atoll when it was buried by a severe winter sand storm in 2011.  Climate change may increase the number of storms like these resulting in lower adult survival and reproductive success for seabirds that nest in low lying atolls and islands.  This adult and many others were saved by DLNR staff stationed on the island at the time.

Kure supported 2854 pairs of Black-footed Albatrosses in 2014, as well as 20 073 pairs of Laysan Albatrosses P. immutabilis that tend to breed inland in more vegetated areas.