Richard Cuthbert (RSPB Centre for Conservation Science, Royal Society for the Protection of Birds, Sandy, UK) and colleagues are publishing early this year in the Journal of Mammalogy on aspects of the biology of the House Mice Mus musculus of Gough Island, well known for their predatory attacks on albatross and petrel chicks, including of the Critically Endangered Tristan Albatross Diomedea dabbenena. 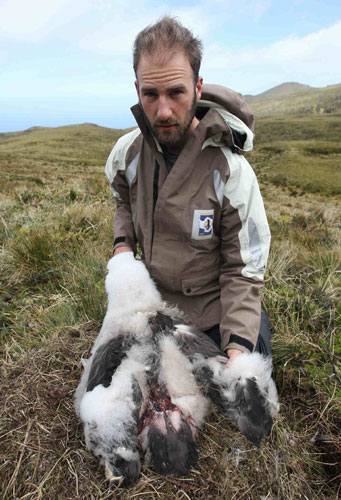 “In comparison to the mainland, populations of rodents on islands are often characterized by a suite of life history characteristics termed the “island syndrome.”  Populations of rodents introduced to islands are also well known for their impacts on native species that have evolved in the absence of mammalian predators.  We studied the ecology and behavior of introduced house mice Mus musculus on Gough Island where they are the only terrestrial mammal and where their predatory behavior is having a devastating impact on the island’s burrowing petrel (order Procellariiformes) population and the Critically Endangered Tristan albatross Diomedea dabbenena.  Mice on Gough exhibit extreme features of the island syndrome, including: a body mass 50–60% greater than any other island mouse population, peak densities among the highest recorded for island populations, and low seasonal variation in numbers compared to other studied islands   Seasonal patterns of breeding and survival were linked to body condition and mass, and mice in areas with high chick predation rates were able to maintain higher mass and condition during the winter when mouse mortality rates peak. Within-site patterns of chick predation indicate that proximity to neighboring predated nests and nesting densities are important factors in determining the likelihood of predation.  We conclude that selection for extreme body mass and predatory behavior of mice result from enhanced overwinter survival.  Small mammal populations at temperate and high latitudes are normally limited by high mortality during the winter, but on Gough Island mice avoid that by exploiting the island’s abundant seabird chicks.”

Read more on the depredations of Gough's mice here.

With thanks to Peter Ryan.