Wisdom, a female Laysan Albatross Phoebastria immutabilis who is at least 65 years old has hatched her latest egg on 1 February on the USA’s Midway Atoll National Wildlife Refuge (well actually her partner had been incubating since 20 January when the egg hatched on 1 February, Wisdom was then at sea). 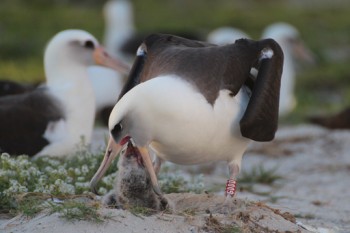 Wisdom returned from a long foraging trip to take over rearing duties on the 7th and the banded male departed the same day.  “We expect him to be back within a week or less because newly hatched albatross chicks require a consistent supply of fresh seafood.”  This season’s chick has been named Kūkini (Hawaiian for messenger).  Following an on-line poll the following names are on the short list for Wisdom’s mate:

Wisdom has successfully raised at least eight chicks since 2006, and perhaps as many as 40 in her lifetime.  Read more here and watch a video clip of the hatching here.

The Midway Atoll National Wildlife Refuge falls within the Papahānaumokuākea Marine National Monument which was inscribed as a UNESCO World Heritage Site in 2010.