A fourth breeding island for the Black-vented Shearwater

“The endangered Black-vented Shearwater has been reported nesting at only three islands in the Mexican Pacific Ocean, one of which contains ~95% of their world population.  We report on the nesting of this species at a new site, Isla Rasa in the Gulf of California, in 2010 and 2011, and on other signs of possible nesting in 2008 and 2009.  Evidence includes a nesting burrow; a genetically identified addled egg at a burrow entrance; nest activity, indicated by tracks and photographs of the nesting individuals; and, in several years, vocalizations, which were monitored to determine prevalence.  Although the number of nests at Isla Rasa has not been determined, our observations confirm the nesting of this species, which is the first such report for the Gulf of California.  We also report on the presence of the species at Isla Partida Norte, as well as on complementary records during marine surveys in the Midriff Islands Region.  Because of the endangered status of the Black-vented Shearwater and of the presence of introduced predators at islands where it is known to breed, the confirmed record of an alternative nesting site, which has now been freed of introduced rodents, bodes well for the conservation of the species.  It will be important to explore other potential nesting sites in the Gulf of California and to promote nesting of the species at Isla Rasa through the use of artificial burrows (nest boxes), vocalization playbacks or other methods.” 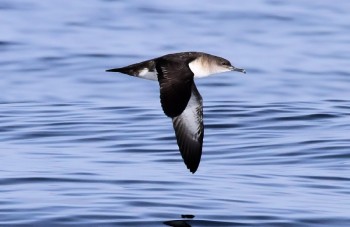