UPDATED. Balloon pollution: a conservation issue for albatrosses and petrels?

A Northern Giant Petrel Macronectes halli (named “Gazza” and likely to be a juvenile by its all-brown plumage) under rehabilitation by the NGO Australian Seabird Rescue in Ballina, New South Wales was recently found to have regurgitated parts of a balloon over a period of several days in its cage.  Along with the balloon fragments the bird also regurgitated a piece of hard plastic and fishing line. The bird was collected from a beach “suffering from exhaustion” late last month.  Following an X-ray, "Gazza" has now been pronounced balloon-free. 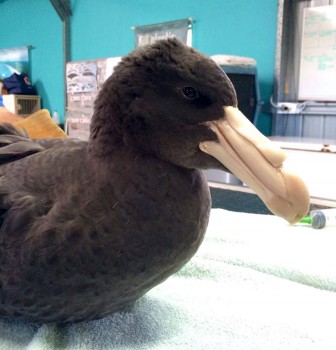 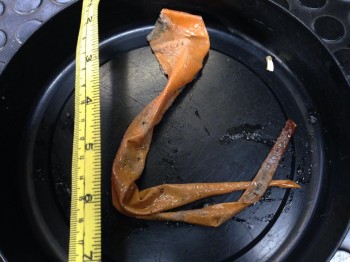 Ingestion of latex balloons is a well-known conservation issue for marine turtles, which apparently mistake ruptured balloons at sea for jellyfish, their natural food, leading to blocked guts and death by starvation (click here).

However, ingestion of balloons by procellariiform seabirds is less well known.  Remains of latex balloons were found in 1-2% of the stomachs of Arctic or Northern Fulmars Fulmarus glacialis beached in the North Sea in a study published in 2008 by Jan van Franeker, and as reported by him to ACAP Latest News. (click here).  Dvaid Ainley and colleagues have reported what they thought to be rubber from a meteoreological balloon in an Antarctic Petrel Thalassoica antarctica.

In 2006, Australian Seabird Rescue successfully removed a balloon and its attached ribbon that had been swallowed by a Southern Giant Petrel M. giganteus under care (click here). 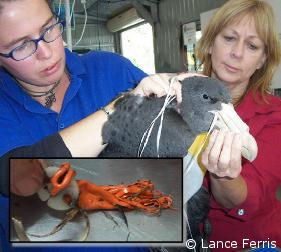 The orange balloon and ribbon removed from a Southern Giant Petrel in 2006, photograph courtesy of Australian Seabird Rescue

Balloons have been reported ingested by or entangled with Black-browed Albatross Thalassarche melanophris and Black-footed Phoebastria nigripes Albatrosses.  The latter species has also been photographed investigating a floating balloon at sea.  Click here for an earlier story on “balloon pollution” in ACAP Latest News.

Black-footed Albatross entangled with a balloon 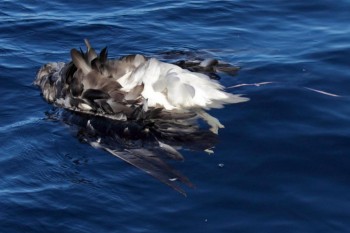 Click here to read more about the conservation issues of releasing lighter-than-air balloons.

With thanks to Peter Ryan and Jan van Franeker for information.