“Following breeding, sooty shearwaters Puffinus griseus leave New Zealand waters and migrate to 1 of 3 distinct areas in the North Pacific Ocean, effectively exploiting environmental resources across a large proportion of this northern ocean basin.  In this study, we combined electronic tracking technology with stable isotope analyses (δ15N and δ13C) of feathers grown during the non-breeding period in order to evaluate whether isotope signatures can be used to identify specific non-breeding areas used by sooty shearwaters.  A region to the east of Japan was utilised by the majority of tracked birds, whereas others used areas off the west coast of North America.  Stable isotope values of feathers allowed the discrimination of individuals that used each of the 3 different non-breeding areas, and suggested that birds off Japan can be further separated into ‘coastal’ and ‘offshore’ groups.  Our results confirm the utility of using stable isotope analysis, validated by tracking devices, as a tool to determine distribution and habitat use of a long-range oceanic migrant, the sooty shearwater. These results also highlight the resource connectivity between the northern and southern Pacific Ocean basin.” 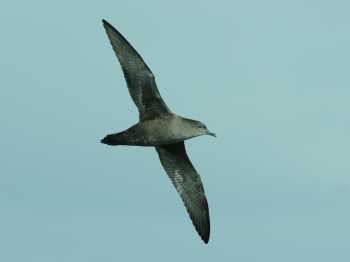