UPDATED:  Followng banding, the two albatrosses have now been released to sea following a boat ride with the Los Angeles County Lifeguards off the San Pedro coastline (for more photographs click here).

ACAP Latest News has previously reported on a Laysan Albatross Phoebastria immutabilis suspected of hitching a ride on a cargo ship (click here).

Now a recent report confirms the presence of a “stowaway” Laysan Albatross on a container ship.  The bird was trapped between two containers for at least 10 days last month on a ship travelling to the Port of Long Beach in southern California.  It was weak and emaciated and slightly oiled when taken into care by International Bird Rescue’s San Pedro centre (click here).  Following treatment the bird is ready for release, along with another Laysan Albatross that was found late last month in the desert city of Rancho Mirage, about 160 km from the Pacific Ocean (click here). 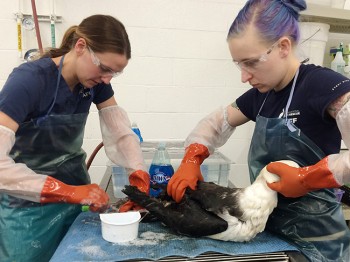 The hitch-hiking Laysan Albatross gets cleaned of oil 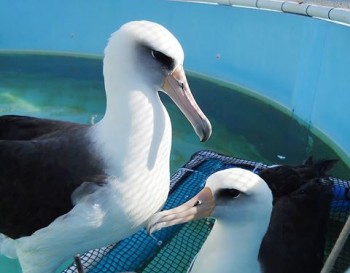 It has been suggested that the birds mistake a ship for a “new breeding site” and have even being seen “building nests” on ships!  ACAP Latest News would be keen to publish evidence of this.