An adult Laysan Albatross Phoebastria immutabilis blind in its left eye has been seen in the north-east of Kauai, one of the USA’s Hawaiian Islands, for the last two breeding seasons.  The bird has been observed courting on a private property but had not as yet commenced breeding (click here). 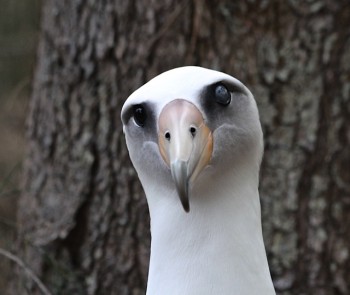 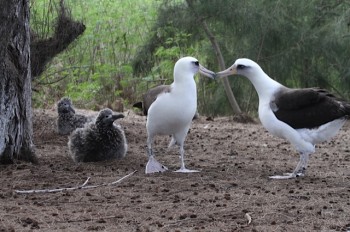 One eye good enough? The courting bird on the right is half blind, photographs by Hob Osterlund

It has now returned to the island for the third year in a row.  The bird was seen to be engaging in brief courtship activities and calling to birds flying by.  It will be interesting to see if it is successful in attracting a partner this time.  It is thought that the blindness, and a minor cossed bill, could have been caused by avian pox contracted from mosquitoes when the albatross was a young chick – which would mean it had survived for several years with only one good eye before becoming a prospecting adult.

With thanks to Hob Osterlund for information and the photographs.