You go that way, I’ll go this way. How do three albatross species at South Africa’s Marion Island partition resources at sea?

“A combination of dietary techniques that integrate data on food and feeding habits over days, weeks and months was used to investigate resource partitioning among 3 sympatric albatrosses, namely the grey-headed Thalassarche chrysostoma (GHA), light-mantled sooty Phoebetria palpebrata (LMSA) and sooty Phoebetria fusca (SA) albatrosses.  These medium-size albatrosses typically breed every 2 yr, and Marion Island (southern Indian Ocean) is the only breeding site where the 3 species are accessible.  Stomach content analysis provided dietary information about the most recent meal, analysis of fatty acids in stomach oils about the last foraging trip, and carbon and nitrogen stable isotope values of blood and feathers about the chick-rearing (breeding) and moulting periods, respectively.  The combination of techniques highlighted a complex pattern regarding the spatial and trophic segregation between the 3 species.  During both seasons, SA were spatially segregated from LMSA and GHA, foraging farther north (in subantarctic and subtropical areas) than the 2 other species (subantarctic and Antarctic waters).  When feeding for themselves during the breeding season (blood isotopic signatures), adults showed a clear spatial segregation.  When bringing back food for their chicks (stomach contents), trophic segregation became obvious, with the 2 Phoebetria species specializing mostly on squids.  The results illustrate how sympatrically breeding birds can show niche partitioning through both spatial segregation and prey specialization.” 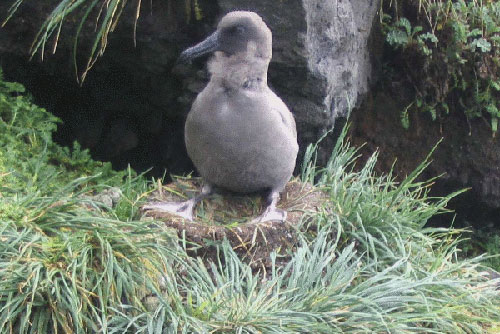 With thanks to Maëlle Connan for information.