Albatrosses and petrels are perhaps the most threatened group of birds in the world. Of the world's 22 species of albatrosses, 15 are considered Critically Endangered, Endangered or Vulnerable according to the 'Red-List' criteria of the World Conservation Union (click here).

Albatrosses, petrels and shearwaters are pelagic seabirds which mainly breed on remote offshore islands and forage over the open sea. They can travel enormous distances across oceans during foraging flights and migratory journeys.

For some populations, such as of the Tristan Albatross Diomedea dabbenena of the UK's Inaccessible Island, the Wandering Albatross D. exulans of Australia's Macquarie Island, the Amsterdam Albatross D. amsterdamensis of France's Amsterdam Island and the Short-tailed Albatross Phoebastria albatrus on the USA's Midway Atoll, numbers are so low (less than 20 breeding pairs each year; sometimes as few as just one or two) that they remain threatened with imminent extinction. Although individual nations are taking measures to protect albatrosses and their kin, these birds are susceptible to threats operating throughout their range. It is unlikely that conservation action by one nation will be effective in conserving highly migratory species such as albatrosses and petrels, and so clearly international action is required. 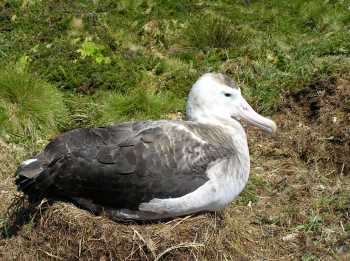 Albatrosses, petrels and shearwaters are threatened globally at sea and on land. Direct contact with fishing operations (both trawling and longlining), ingesting or becoming entangled in marine debris, pollution and overfishing of their prey are major threats at sea. In breeding colonies, they may be threatened by predators, habitat damage, competition with other animals for nest space, parasites, disease and human disturbance. The Agreement allows Parties to implement action plans to protect critical habitat, control non-native species detrimental to albatrosses and petrels, introduce measures to reduce the incidental catch of seabirds in longline and trawl fisheries, and support research into the effective conservation of albatrosses, petrels and shearwaters.

Conservation of highly migratory species such as albatrosses and their kin cannot be achieved by one country acting independently of other nations which share the same species' populations. Because of this, in recent years countries which share populations of threatened seabirds have sought to take actions on an international level to complement policy and actions taken within their own jurisdictions.

ACAP currently covers all of the World's 22 albatross species along with nine species of petrels and shearwaters: a total of 32 species.