Are hybrid albatrosses the result of rape? The case of Laysan and Black-foots in the Northern Pacific

Sievert Rohwer (Department of Biology and Burke Museum of Natural History, University of Washington, Seattle, USA) and colleagues have “pre-published” in the on-line open-access resource PeerJPrePrints on the link between hybridization and rape in Black-footed Phoebastria nigripes and Laysan P. immutabilis Albatrosses. 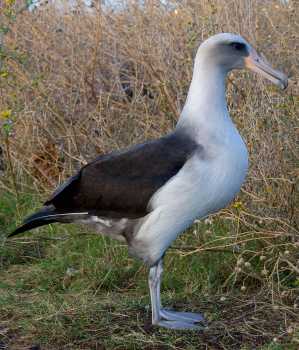 “The analysis of environmental characteristics to explain the distribution of endangered seabirds can aid in the identification of important areas at sea and lead to more effective conservation.  We used high resolution Global Positioning System (GPS) tracking data to study the at-sea patterns of chick-rearing Chatham albatrosses Thalassarche eremita across 3 years (2007, 2008 and 2009) in relation to bathymetry, slope, sea surface temperature (SST) and chlorophyll a (chl a) concentration. Birds mostly foraged within 400 to 600 km of their colony, located within the southeastern part of New Zealand’s continental shelf, the Chatham Rise.  Despite little spatial overlap across years, foraging areas were predominantly associated with waters of less than 2500 m depth, slopes of 1 to 4°, SST between 15 and 16°C, and chl a concentrations >1 mg m-3 in all years.  According to boosted regression tree models, no single habitat variable particularly explained the spatial occurrence of foraging areas.  However, bathymetry was of higher relative importance in 2008 and 2009, while chl a was relatively more important in 2007, a year of increased primary productivity.  Our results suggest that chick-rearing Chatham albatrosses rely on resources that are generally predictable in location, but that they also respond to fine-scale changes within their foraging environment.  Incorporating such dynamics into conservation planning might be best addressed by mitigating incidental bycatch in fishing operations, as well as implementing a protected area southeast of the breeding site, which we identified as a key foraging zone.”

For an ACAP Latest News item on Lorna’s PhD on Chatham and other albatrosses click here.

No place quite like home: breeding site fidelity is high in Streaked Shearwaters

“Site fidelity of Streaked Shearwater Calonectris leucomelas on Kanmurijima Island, Sea of Japan (35°40’N, 135°26’E) was analyzed based on a 27-year banding record from 1984 to 2010.  Two study sites were set in this colony, and return fidelity to the initial release site was assessed.  Most returns occurred at sites where they had been released.  Only small percentages (0.7% and 0.2%) of the returns were recorded in the other study sites.  Site fidelity was further analyzed using a 10 m × 10 m grid at one study site.  Returning birds showed high site fidelity.  The rate of returns within 10 m of the release place among the total returns was defined as the site fidelity index.  Based on a total of 4154 returns, the index was calculated to be 0.73.  The index was almost unchanged with increasing duration between the first release and the return.  Even after 20 years, birds returned to the vicinity of the initial release site.  The annual change in the index fluctuated from 0.54 to 0.81, with a slight increase during the most recent study period.”

“Little is known about the conservation requirements of Bryan’s Shearwater Puffinus bryani, first described in 2011 based on a specimen collected in February 1963 near an area containing concrete rubble at Midway Atoll.  Here we document a second Bryan’s Shearwater observed on Midway during the winters of 1990/91 and 1991/92.  It was vocalizing from a 0.5–0.7 m crevice within an accumulation of artificial concrete and coral rubble.  Recent winter specimens of Bryan’s Shearwaters from the Bonin (Ogasawara) Islands, Japan, were also collected in areas with rocky crevices, possibly burrows they co-utilize with summer-breeding Bulwer’s Petrels Bulweria bulwerii.  This habitat is not found naturally on low-lying atolls in the Northwestern Hawaiian Islands; however, it does occur on Nihoa and Necker Islands, where Bulwer’s Petrels breed abundantly.  Digitized video and vocalization recordings from 1991 on Midway, detailed here and available at http://www.birdpop.net/index.php/en/brys, are currently being used to locate breeding Bryan’s Shearwaters in the Bonin Islands.  Similar monitoring should be considered for Nihoa and Necker Islands.  None of five at-sea records of small shearwaters in the central and eastern North Pacific Ocean can be confirmed as Bryan’s Shearwater; thus, nothing is currently know of its life history or requirements at-sea.” 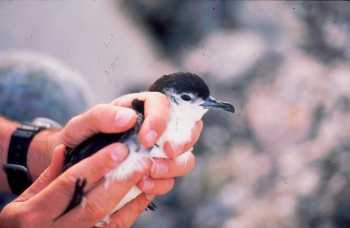 Flying with the passenger door open to allow for photography, a Bell 212 helicopter of Starlite Aviation Operations flew Peter Ryan, Director of the University of Cape Town’s Percy FitzPatrick Institute around the island on 27 April this year.  Using two cameras with 17-40-mm and 70-200-mm lenses all the localities where Wanderers were breeding were adequately photographed from a height of about 200 m.  A lower altitude may have caused disturbance to the island's three breeding colonies of King Penguins. Wandering Albatross chicks visible on the photographs will now be counted to yield an island total.

The survey was flown from South Africa’s new Antarctic supply and research ship the S.A. Agulhas II while it was visiting nearby Marion Island to support the annual relief of the meteorological and research teams who have been on the island for 13 months (click here).

The survey was undertaken at the end of the albatrosses' brood/guard stage.  Breeding success information collected in study colonies on Marion Island will now be used to calculate a correction factor so that the likely number of incubating Wanderers can be estimated for the 2014 season.

Albatross Valley, Prince Edward Island from the air in 2014...

... and from the ground in an earlier season.  Photograph by Bruce Dyer

This was the second aerial survey of Prince Edward’s Wanderers aimed to gather data to support the activities of the Albatross and Petrel Agreement.  The first survey was undertaken last year.  Because of its pristine nature with no introduced mammals, ground visits to Prince Edward Island only occur in terms of the island group’s management plan at four-year intervals, hence the need to undertake aerial photography to obtain yearly data.

With thanks to Peter Ryan for information and aerial photographs.